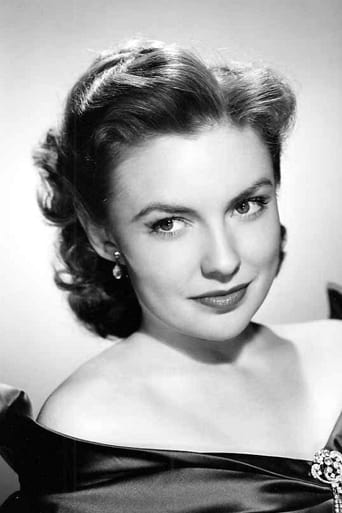 From Wikipedia, the free encyclopedia Joan Leslie (born Joan Agnes Theresa Sadie Brodel; January 26, 1925 – October 12, 2015) was an American actress, dancer, and vaudevillian who, during the Hollywood Golden Age, appeared in such films as High Sierra, Sergeant York, and Yankee Doodle Dandy. Joan Agnes Theresa Sadie Brodel was born on January 26, 1925, in Highland Park, Michigan, the youngest child of John and Agnes Brodel. At 15, Leslie had her first significant role as the crippled girl in High Sierra (1941), starring Humphrey Bogart and Ida Lupino. The same year she played in Sergeant York as York's fiancée. Leslie had a supporting role in The Male Animal (1942) as Olivia de Havilland's younger sister. In Yankee Doodle Dandy (also 1942) she portrayed George M. Cohan's girlfriend/wife. By now, Leslie had become a star whose on-screen image was described as "sweet innocence without seeming too sugary." Leslie was in four motion pictures released during 1943: The Hard Way, starring Ida Lupino and Dennis Morgan; The Sky's the Limit (1943), starring with Fred Astaire; the wartime film This Is the Army (1943) with Ronald Reagan; and finally Thank Your Lucky Stars. During World War II, she was a regular volunteer at the Hollywood Canteen, where she danced with servicemen and signed hundreds of autographs. She was featured with Robert Hutton, among many others, in the Warner Bros. film Hollywood Canteen (1944). In 1946 Leslie's career took a dive when she took Warner Brothers to court in order to get released from her contract based on moral and religious grounds because of the parts they kept giving her. She wanted more serious and mature roles. In 1947, the Catholic Theatre Guild gave Leslie an award because of her "consistent refusal to use her talents and art in film productions of objectionable character." As a result of this, Jack Warner used his influence to blacklist her from other major Hollywood studios. From this point on Leslie had a more irregular film career. In 1947, she signed a two-picture contract with the poverty row studio Eagle-Lion Films. The first one was Repeat Performance (1947), a film noir. The other was Northwest Stampede (1948) in which she performed with James Craig. In 1952, she signed a short-term deal with Republic Pictures. One of the films she made for Republic was Flight Nurse (1953). Her last film was The Revolt of Mamie Stover (1956). However, she continued making sporadic appearances in television shows while her children were at school. She retired from acting in 1991, after appearing in the TV film Fire in the Dark. Leslie died on October 12, 2015, in Los Angeles, California. She was 90. Her survivors include her two children and one sister, Betty. On October 8, 1960, Joan Leslie received a star on the Hollywood Walk of Fame at 1560 Vine Street. In 1999, she was one of the 250 actresses nominated for the American Film Institute's selection of the 25 greatest female screen legends to have debuted before 1950. On August 12, 2006, she received a Golden Boot Award for her contributions to Western television shows and movies.